Why does Charlotte have a fall cankerworm problem?
For the past 20 years, the cankerworm population in Charlotte has continued to grow. Natural controls have not been adequate to bring the cankerworms to a level that is not harmful to our tree canopy. Aerial spraying in 1992, 1998, and 2008 and other natural factors reduced the population for several years. The City started a banding program on street trees while requesting homeowners and businesses to cooperate in 1990. The banding efforts have continued for the last 16 years. Entomologists cannot explain why the cankerworm populations continue to increase but the City’s large concentration of old willow oaks may promote the infestation

What is the fall cankerworm?
The fall cankerworm (Alsophila pometraria) is an insect native to North America. It is typically found from Georgia to Nova Scotia and west to Texas. It has a four-stage life cycle: egg, pupa, larva (caterpillar), and adult.

How does the fall cankerworm affect trees?
After mating in December, the female moths crawl up trees to lay their eggs on twigs and mall branches. As the trees leaf out in the spring, the eggs hatch leaving small green caterpillars to feed on the leaves. In most cases, the cankerworm will not kill the trees; however, repeated defoliation can weaken trees and make them more susceptible to other stresses, such as age, drought, other insects, and disease. Once they hatch in the spring, the cankerworms can balloon to other nearby trees. They are very light and can be blown from one tree to another.

How to band a tree
Step 1: Install a strip of cotton or insulation around the tree at least three feet from the ground and below the lowest limb.
Step 2: Position a band of roofing felt over the strip and attach it to the trees with the staple gun. Avoid using staples on small, young or thin-barked trees. Instead, use electrical tape to hold the bands.
Step 3: Using disposable gloves and a putty knife, put a film of Tanglefoot (glue) directly on the band, approximately 1/8″ thick.

In order to be effective, all trees need to be banded. The worms feed on all types of trees. Large trees (taller than a two-story house) are the main focus of banding. Small trees can also be banded. The bands should be removed during the first week of February.

Founded in 2005, Vision Green Landscape is a full-service landscaping company based in Charlotte, NC. 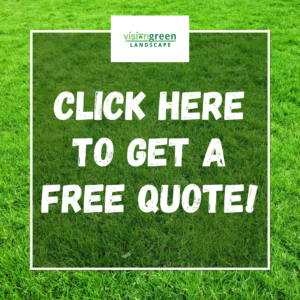